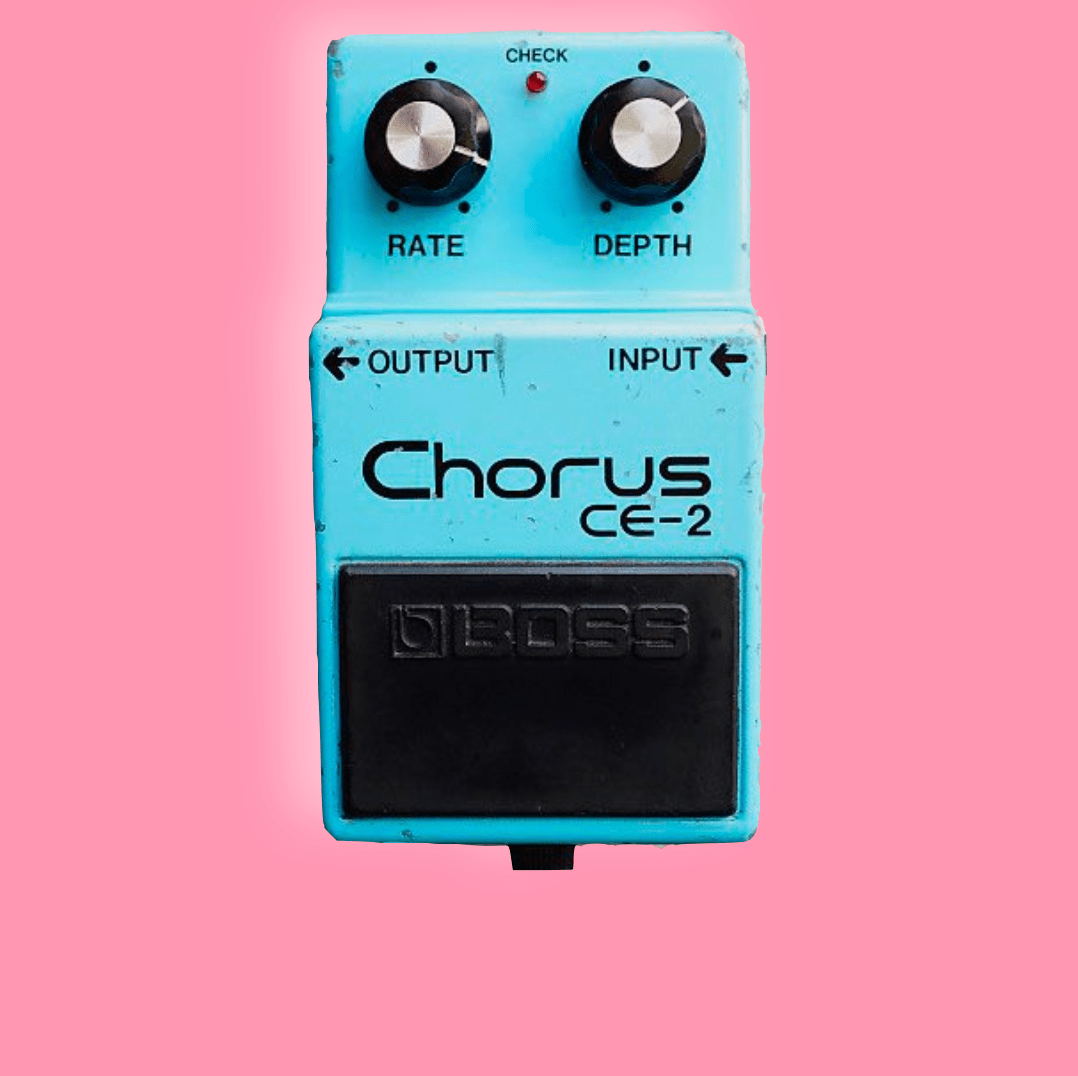 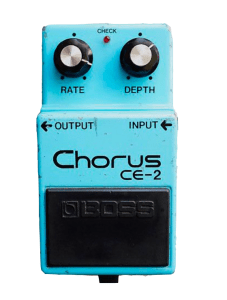 — An analogue chorus pedal from the mid-eighties, capable of subtle and warm modulation

— A programmable or sophisticated unit

The BOSS CE-2 is a timeless entry in the BOSS catalogue. Made in Japan from the early 1980’s; its lush, analogue modulation has adorned the boards of many guitar legends. From David Gilmour to Johnny Marr — its authentic, ‘shimmery’ overtones have proved popular for a number of decades. So much so, that it was recently reincarnated as part of Roland’s ‘WAZA Craft Range’, in 2016.

What makes the CE-2 so special, though, isn’t just nostalgia. It’s rather the musical and unique quality to its voicing. It’s not sterile like many digital chorus units, nor is it overly present or intense like its more developed counterparts. In many ways, it is the perfect culmination of its time: representing both the benefits and limitations of analogue music technology.

In fact, the CE-2 is all together a rather subtle effect. Conservative settings add small movement to ones’ sound whilst its more extreme moments border on vibrato. But it never quite reaches the intensity of modern units. Which serves as something of a positive attribute: as it is, above all else, difficult to get an unusable sound out of this box.

For the accompanying demo, I work through the separate ‘Depth’ and ‘Rate’ parameters, separately and in conjunction. Around half-way I introduce more pre-amp gain from the Blackstar Artisan 30, by pushing the clean channel’s gain into breakup. The unit in question is a MIJ Pink Label, from 1986.

With the knobs at roughly noon, the CE-2 has a warm and — perhaps unsurprising — ‘vintage’ quality. The pitching is clear whilst not overbearing;  with a ‘roundedness’ to the overall sound that is all together rather pleasant. To some extent, it’s a strangely familiar tone: one that has no doubt featured on many classic records. As the rate increases [0:30], it becomes inevitably more pulsating. It’s certainly not a uni-vibe or vibrato LFO, but with the depth dialled back, it adds a unique sense of movement to the signal. I actually find this more usable than more extreme settings — akin to how Billy Corgan uses the MXR Phase 90 to flavour lead parts. And when studying the rate knob in isolation, [2:15–3:50], it’s clear that there’s a use for every application on tap, too. The depth control [3:50–4:45], similarly, offers a range of usable tones. At its highest settings, it has that glassy, rich quality that is typically ascribed to good chorus pedals. Yet with a presence that sits nicely in the mix.

With the controls maxed out [1:10-2:10], the CE-2 has, naturally, a more ‘swirly’ and overtly pitched sound. It’s a thicker tone that has a chewier attack and responsiveness. However, what is immediately apparent in this demo, is how dynamic this setting is in regards to pickup selection. The bright-and-tight neck pickup on my telecaster gives a softer, full-bodied tone — whereas the hotter and more open bridge pickup offers something a little more aggressive. It’s this responsiveness that really makes the CE-2 an interesting pedal. (Especially when stacking with others) It plays well with whatever it is fed and can provide texture for various applications – well beyond those usual ‘eighties’ stereotypes.

Indeed, one of the more overlooked qualities of the CE-2 is its response to gain and EQ. Whilst chorus is usually lauded as a ‘clean’ effect, this unit work incredibly well with pushed or broken-up sounds. At 2:45, the pedal adds a mild watery effect to my high-output bridge pickup. It brings depth to the overall ‘crunch’ without divulging in high-gain or excessive modulation. In other words, it responds almost as if there is a small gain stage within the pedal, clipping softly with the signal. It blends into something organic and less discernible with the dry signal.

When applying more preamp gain, [4:45], this dynamic becomes immediately more apparent. It adds those glassy overtones, yet cleans up when needed all the same. More specifically, at 6:30, the high modulation rate audibly clips the amp further, adding to that more aggressive — if not more interesting — sense of movement. No doubt, it’s in the very nature of analogue pedals to be unpredictable. But this ‘back and forth’ between different gain levels or EQ voicing allows for a surprisingly versatile unit. It reaches wide, expansive tones at the 7 minute mark, reminiscent of Duran Duran’s ‘Come Undone’. Yet it’s happy to take a backseat too: adding much needed ‘sparkle’ to a dry signal or Bigsby vibrato.

The BOSS CE-2 is a classic for, if anything, good reason. It has the organic and watery qualities that guitarists invariably look for in a chorus unit. It’s capable of those expansive textures and sparkly indie tones with nonchalant ease. But I’d argue that it actually goes beyond this. It’s the chorus pedal for those put-off by chorus effects, too. Hell, I’ll be the first to admit that the overproduced, sterile tones usually attributed to the effect make me run a mile. But what I enjoy about the CE-2 is that back and forth with my guitar. The sweet-spot when facing a broken-up amp. The way it cleans up with pickup volume and output. It’s particularly useful for those aggressive post-punk tones or those simply seeking an added flavour to their lead sound. In fact, I see the CE-2 Chorus as much as a dynamic effect — like an EQ or booster — that adds girth and shimmer to my tone, as it is an ‘effect’ in its own right.

As for its shortcomings? It’s inevitable limited by its age. The buffer isn’t perfect and the check light on my unit has long since died out. There are times, also, that I’d appreciate a wet/dry mix control to really sculpt the affected signal. But whatever the CE-2 lacks in features, it makes up for in tone. It really is a wonderful unit, that inspires and surprises me to this day. It’s the variety and quality of its applications – a sort of sheer resourcefulness – that makes it the only Chorus that I’ll keep on my pedalboard. And one well worth those god-awful eBay prices.