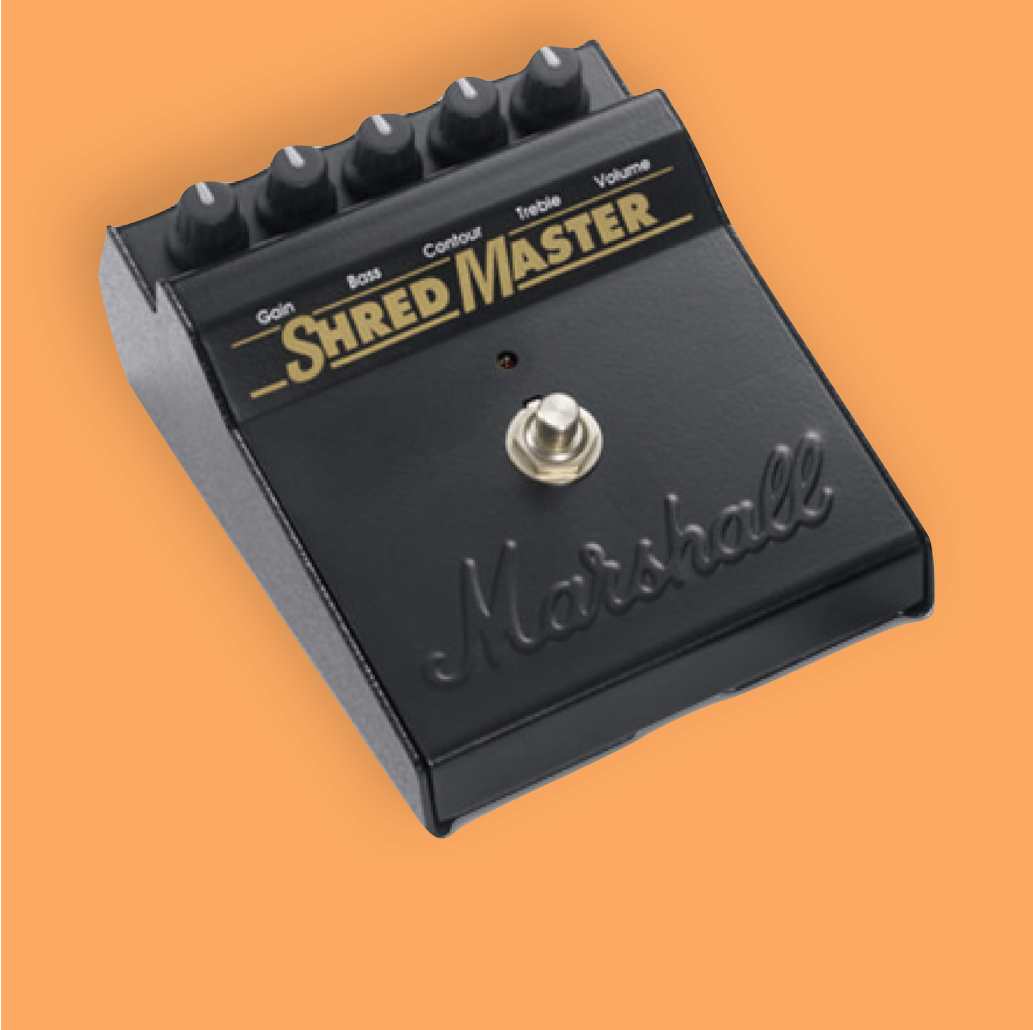 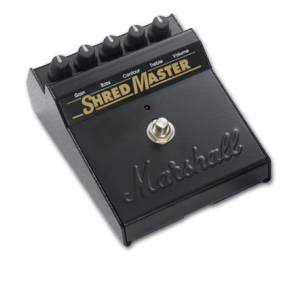 — Capable of abrasive rock tones via a three-band EQ

— The most accurate ‘Marshall in a Box’, nor particularly suited for metal

Few pedals are shrouded in folklore. Be it the Klon, the Echoplex or the 3005 chip Deluxe Memory Man — some of the greatest, and most inflated, effects have an elusive mythos attached to them.

What makes the Marshall Shredmaster so curious is that said mythos is generally misplaced. It’s remembered almost entirely for being something else. Discontinued not long into the millennium; this box has become inseparable from the (beloved) nineties rock scene. From Johnny Greenwood’s soaring leads in ‘Just’ to Alex James’  bass-line in ‘Song 2’ — it’s unsurprisingly a collectors piece. But for a pedal touting the Marshall badge and supposedly aimed at the ‘shredder’ market, the Shredmaster holds the strange capacity to satisfy neither. It’s a great dirtbox no doubt — but it is not an organic, ‘Marshall in a Box’. Nor is it the highest gain pedal Marshall have made. In fact, their ‘Drivemaster’ — a seemingly lower-gain moniker — had comparably more gain in my experience.

But what the Shredmaster offers is a distinctly abrasive, raw rock tone. It’s not particularly versatile — it only really comes into its element around the higher gain settings — and it certainly isn’t transparent. But for that searing, Greenwood tone: it’s unmistakable. A hard clipping with fuzz like sustain and a notably contoured voicing. And the Shredmaster is fascinating pedal all together. A British made stomp box with a unique shape and styling. It sports conventional gain and volume parameters, with bass, treble and a ‘contour’ knob that works as an inverted mid control. This drastically scoops out mid frequencies, presumably, for the ‘shredder’ in your life.

For the sake of the demo, I run through the low to higher gain settings. I adjust the EQ where appropriate and butcher some of the greatest guitar playing in a generation through my fatigued playing.

With the EQ at noon [0:25], the Shredmaster has a rather forgettable bite to it. It’s inherently quiet and even with the volume at 1 o’clock, it lacks unity gain or presence in the mix. But as the gain knob is pushed, it gets a little more exciting. At 3 o’clock [0:55] it has an Interpol crunch and as I run through the treble [1:20] and bass [1:40] controls, it clearly sports a tactile EQ circuit. These shape the tone with a muscular tout and high end that really cuts through the mix, provided we’re pushing the gain a little. But it’s that curious contour knob, that remains most pertinent.

At [2:10], I rotate this knob — and severe contact-cleaning couldn’t silence that twenty year old crackle — to demonstrate the range of tones on tap. This ‘reverse mid control’ is incredibly dynamic; offering a speaker-splitting mid-thump to a ‘scooped’ underwater quality, in a single turn. And whilst some of these settings are more usable than others, its range is striking.  But such a debacle also best defines the Shredmaster. It is indeed capable of different tones, but not all of these are particularly inspired or usable. I personally find that the shrill, ‘cranked’ gain sound is really what makes the pedal worth owning. Tones that are best accessed by modestly adjusting the contour knob and keeping the gain somewhere on the right side. Which makes a great number of its applications, more-or-less redundant.

In the attached demo, I continue to peruse these settings. At 2:55 I switch to the lower, vintage output neck pickup to demonstrate how well it cleans up with different output sources. Despite its synthetic and abrasive voicing — the Shredmaster responds surprisingly organically to volume. But as I continue to ramp up the gain with the brighter bridge pickup [i.e 3:10 onwards], it becomes abundantly clear that this where the pedal shines. It captures the ‘wall of sound’ that I associate with — and badly pay tribute to — those early Oasis and Radiohead records. It’s also capable of mid-heavy high gain tones, too — best captured by the thicker, QOTSA-esque riffs at 4:25 — and more intricate, nasally lead parts a la ‘Hunting For Witches’, at 5:00.

What is interesting about these qualities is it that they seem far removed from the Shredmaster’s intended purpose. From 5:30, I push the contour knob to attain a Metal Zone style tone, which is more laughable than it is brutal. Yet this may have been the mid-scooped ‘shredder’ market it was originally gunning for. Remarkably, its the more mid-centric tones I achieve thereafter that seem all together more useful. I also dial back the gain at around 7:25 to show its more traditional rock applications. These are not far removed from Peter Buck ‘R.E.M’ territory — which I consider the high-watermark of classic, crunchy tones. Towards the end of the demo I also lean back on the neck pickup to touch upon its versatility. Whilst I maintain that the pedal’s defining qualities are its ‘wall of sound’ and vocal-like leads — it can cover a lot of turf. If anything, though, it typifies its shortcomings. That despite the variety of sounds on tap, it rally is either all or nothing in terms of gain. It’s either crunch or more crunch — gain or more gain. It either operates as a lower-gain crunch or an all-out bombardment of your senses. Of course, for a pedal deemed the ‘Master of Shred’; it’s ill advised to look for John Mayer tones here. But note there is little nuance or subtlety in this unit.

Above else, the Shredmaster is a worthy distortion pedal provided it’s valued at what it does best. It is often misconstrued as a perfect Marshall simulator (an Angry Charlie, Dirty Little Secret or Purple Plexi would be better suited) — but it is, undoubtedly, the sound of the nineties. It’s that gritty, cranked British tone that somehow uses negative tonal qualities — of being nasally, abrasive and shrill — as part of its unique selling point. And whilst it is not a pedal for the shredder or ‘djenter’ in your life, it has a post-punk and brit-pop attitude to it. So for all the nostalgia, hype and truism that it’s better sat in a museum than your pedalboard: it has its charm. The Shredmaster can tear a speaker and its listener in half, all the same. And that’s what really hurts.