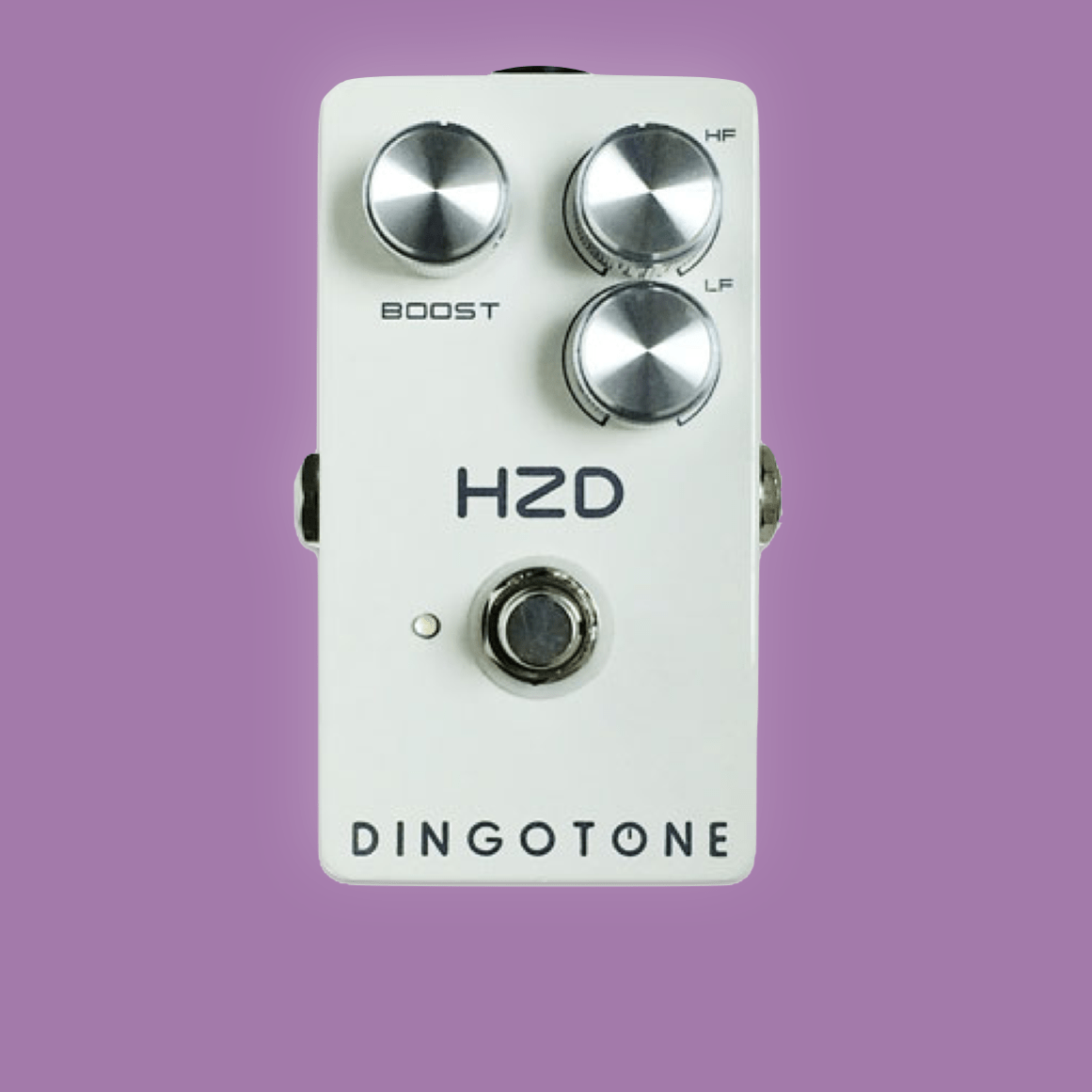 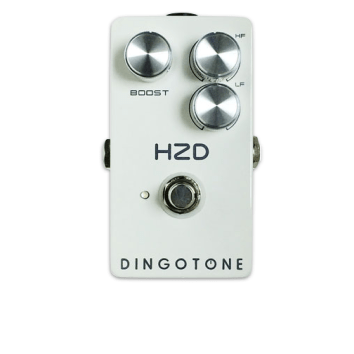 — A clean booster, lovingly based upon the Boss FA-1

— Sporting a two-band EQ and up to 30dB of boost

— A conventional overdrive. Or made by dingos.

The Boss FA-1 is a curious pedal. A green, unsightly unit that fastened directly on to your belt strap. A pre-amp — a damn good one at that — which cooked the front-end of an amp with a cascaded FET stage. Which, at least in layman’s, sounded particularly organic and valve-like. The biggest advocate for this was The Edge, whose ‘pushed’ clean tone during the early-80’s remains increasingly distinctive. The FA-1 proved especially useful for giving single coils an extra punch, even if it lacked obvious practicality in terms of a footswitch.

The Dingotone HZD, however, is much more than this. Handmade in Calgary, Canada; Dingotone’s unit revises this circuit and extrapolates its best qualities. In short, it retains the natural, harmonically rich presence — but with extra headroom, a more tactile EQ and most notably — the ability to turn it off. It’s also been my secret weapon for over five years. It can be a pre-amp, a solo boost and if your neighbours can handle it: a fantastic overdrive as well. Making it not only a pleasing sounding pedal — but an immeasurably useful one, too.

For the demo, I run through either side of 12 o’clock to demonstrate the clean boost, both in pushing the front end and as an EQ. I go onto crank it into overdrive territory before demonstrating its role as a solo boost.

With the boost at 1 o’clock; the HZD offers a familiar ‘Bloody Sunday’ bite. This adds a tout bottom-end and a sparkly treble response that doesn’t become brittle. It’s musical and cutting without any nasty artefacts. It drives the pre-amp stage of the amplifier pleasantly — without being overtly driven or saturated. When pushed a little harder,  [0:30] — it fills out rhythm sections rather well. More on that later.

When wound back, however, the HZD functions as an effective EQ. Compensating for lower-output pickups with every notch of the boost dial — and providing EQ adjustments through its respective parameters. At 0:55, I roll the boost down and play with the treble and bass controls until 2:40. Throughout this, note there is nothing ‘too bright’ or particularly ‘muddy’. The darker settings retain ‘telecaster twang’ whilst gearing it towards heavier rock styles. This is a remarkably useful application. It helps pair conflicting parties (amps, pickups etc), whilst retaining the character of the instrument.

Pushing the boost harder results in naturally harder clipping. From 2:45 onwards I incrementally crank the boost into overdriven waters. This can get incredibly loud — at least in the room — but it retains a transparency that is worth discussing. By using those valve-like FET stages, it proves a thick, natural breakup without relying upon other gain stages. It is a distortion in every sense of the word: but without the usual tinny or fizzy qualities. And whilst I would not recommend using this live — the lack of a master volume makes this hard to tame — it is powerful in a studio environment. And it sounds brilliant.

n.b In the demo, I continue to demonstrate its overdrive potential — with it fully cranked at 4:30. With the jarring volume spike untampered in editing.

In a lead boost capacity, [5:30], the HZD’s headroom really comes into fruition. That aforementioned volume jump garners a better result when trying to cut through the mix. The EQ knobs further this — cutting bass to really let that solo playing stand out. This is also, currently, how I use the HZD. It adds volume and presence without the compression or noise that a traditional booster would. It feels more natural — injecting a singing quality to lead parts. But all the same, it retains the tonal qualities of the dirt box feeding it, just as it maintains instrument tonality in cleanlier settings.

Ultimately, the HZD is a high-quality and well conceived boost. It offers natural clipping and usable EQ parameters. It’s a true-bypass unit and can even bump its internal headroom with a 24V adaptor. Given the sheer versatility — and quality — of tones on tap; it’s an incredibly difficult unit to fault. It’s not so much ‘a jack of all trades master of none’ but rather a master of a few, specific tasks. It has been a pre-amp, an ‘always-on’ EQ and a solo boost during its tenure on my pedalboard. It’s longevity is well proven. And the musical, inspiring quality of its applications continue to amaze me. It brings a high-definition quality of sorts to my playing. The HZD is an  improvement on a classic recipe but a staple in its own right.

And I’ll probably be buried with it.

n.b the review model is an original hand-signed LaurePedal HZD. Dingotone have tweaked the production model since as it now operates within a new enclosure. I am in no way affiliated with the builder and I payed for the pedal with my own, currently failing, British currency.