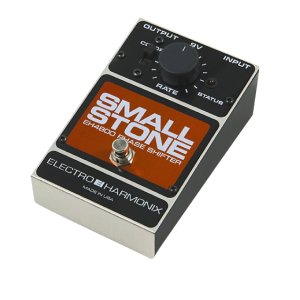 The orange one-knob phaser is a tried and tested design. Its simplicity is recognisable and timeless. And whilst the well-known MXR variety earns its place in pedal folklore; the alternatives that surround it deserve some attention. In fact, the Electro Harmonix Small Stone is a perfect example of competitive engineering. Emerging under Mike Mathews’ EHX in 1974, it’s seen various iterations and circuit change over the years. But its take on the four-stage phaser — competing directly with the Phase 90 — has its own charm and character. And it remains a go-to unit for my phasing needs.

In short, the Small Stone applies a different phase effect. It uses OTA chips rather than FET circuitry and sports an additional colour switch. Its voicing is slightly deeper, with an emphasis on a lower-mid ‘swoosh’ and the colour parameter adds extra feedback. Which, essentially, extenuates the peak and trough to carve a more dramatic effect. The unit I am reviewing here is the v4 NYC circuit. Which operates within a ‘big box’ enclosure and with a — rather annoying — 3.5mm 9V jack.  This model is more akin to the nineties model of Johnny Greenwood fame than the rarer Sovtek counterparts. But it sounds bloody good all the same.

As with all my reviews, I approach the pedal in isolation then bring in a dirt box later. For the sake of consistency I am using the Twin Twelve at 5 minutes in. I also apologise for some lighting issues and general fatigued guitar playing — I was sweating out a flu whilst filming this.

At noon, the Small Stone offers a mild sweep. Given there are no parameters for volume or tone; it sits under your clean signal with no fine tuning. Notice there is an immediate volume drop at 0:35 — which is discussed in due course. But the general tonality is rather warm. It’s also incredibly responsive to picking attack, which I emphasise throughout. Either side of noon, it remains musical. I can get quasi-chorus effects — hence the garbled ‘A Forest’ Riff’ at 1:05 — to swirly, vibe-inspired moments. At 2:45 its forgoes any subtlety but the faster rate still adds dimension and width. It’s actually quite versatile despite the lack of controls.  There’s a thick, musky quality to it all.

At higher settings, however, the Small Stone becomes more vocal. From 3:10—4:00 I play around with the pushed settings. It’s much spongier and overt — but still great fun and thoughtful. It even borders on Leslie tones with the rate is cranked up. (See Also: ‘Badge’) In fact, it’s worth noting the range of sounds the single knob is capable of. Fully maxed out; the throbbing is almost unusable. Yet it can provide a basic vibrato of sorts with a little tweaking. The colour switch also adds more sweep. It’s a little dramatic for my taste, but works well in lead tones. From 4:20 onwards we can hear the overtones it brings to the mix. It almost turns the effected signal into a flanger: enhancing those crushing highs and lows. It’s definitely a vintage effect and avoids the digital artefacts that so many newer units suffer from. But all the same, perhaps this is where the Small Stone could most obviously benefit from extra parameters — as it tends to oscillate a little uncontrollably.

With dirt, a similar logic follows. It’s more flamboyant at higher settings but there is a musical quality to the Small Stone that is not found in other phasers. At five minutes in, it provides a basic EVH tone with higher settings [6:00] offering that vibrato effect to greater avail. The colour knob, activated at 6:45, brings even greater theatrics — whilst clearly overbearing — for the space-rock or prog-rock enthusiast, it offers a lot to play with. No doubt, it’s a pretty inspiring box. It’s also worth noting how signal chain affects it. This is, after all, an analogue effect. For the final thirty seconds or so, I run the phaser into an overdrive, which is instantly more subtle and dampening to the wet signal. It mixes more organically as a result and makes the sweep less pronounced. I actually rather enjoy this. Modulation can be a bit dramatic at times and this remedies it. But note that such a move will exaggerate the perceived volume drop when switching between pedals.

In fact, the only overhwlming setback — which for many will be a deal breaker — is that audible volume drop. This can be alleviated by applying a booster afterwards but that negates a great deal of its simplicity. In a studio setting this is not a significant problem although those using the pedal live will fall through the mix. It’s a shame and it is why I did not tweak the volume throughout the demo. It sounds fantastic and one can find ways around this — I recall using it for quieter sections in a band situation and picking dynamics will change its severity — but it remains an obvious issue worth addressing.

Above else, the Small Stone is a great phaser. As one who struggles to click with modulation effects; there is a warmth and character to this box that makes it hard to part with. And whilst the volume drop has caused a great deal of heartache over the years  —  I will not dismiss writing or recording with it. The Small Stone really is a classic in its own right. It has a luscious, retro-modern voicing that can suit a number of styles. It can also be picked up relatively cheap on the used market. Of course, it’s not an effect for everyone, but those not ‘jumping’ for the Phase 90 or its counterparts may find solace here. And it remains, indefinitely, my weapon of choice in this department.