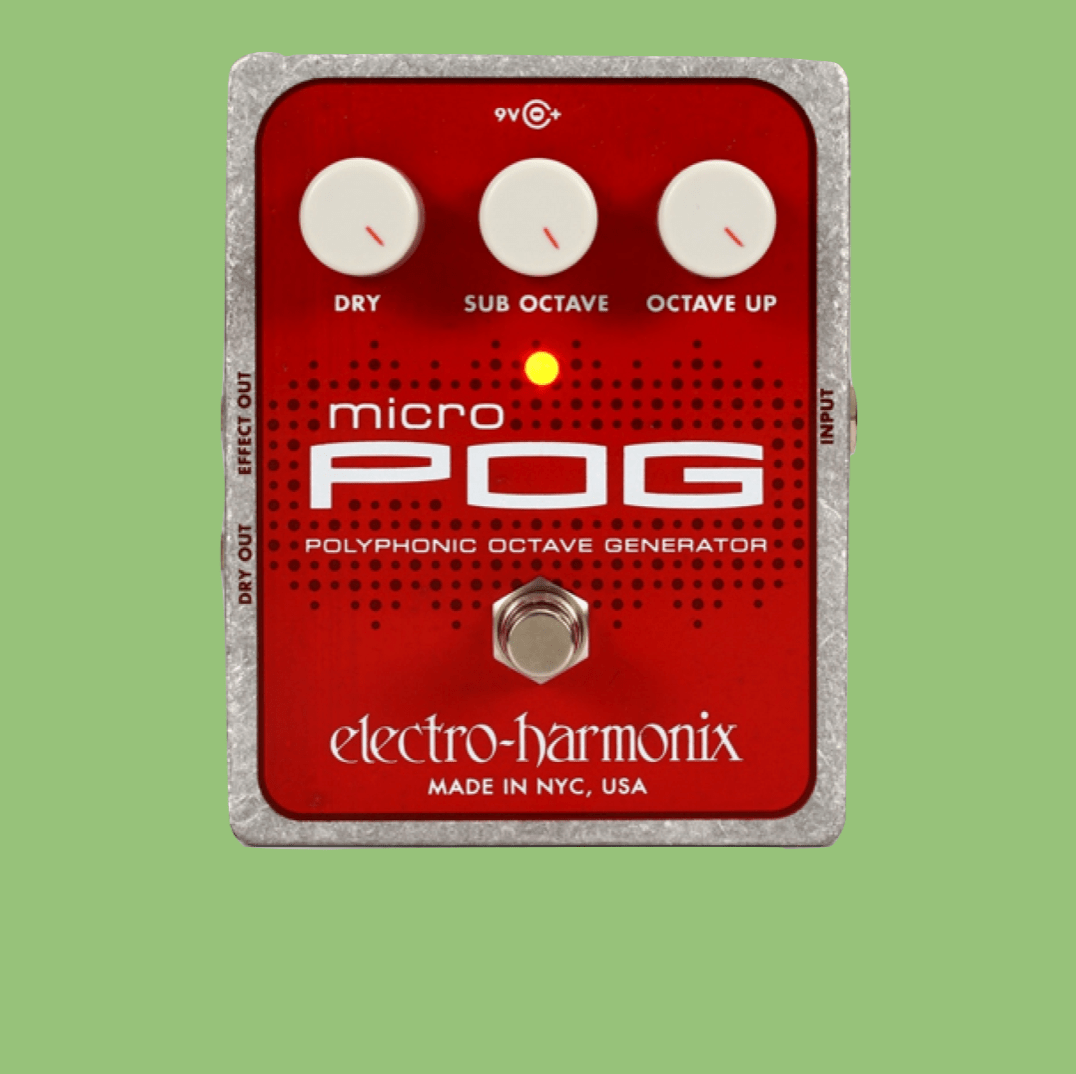 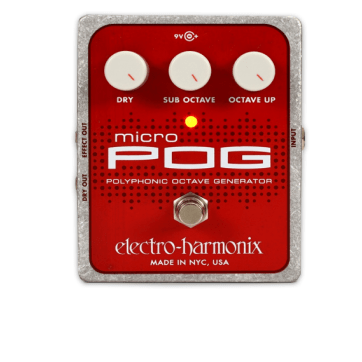 — A polyphonic octave pedal, capable of tracking an octave up and below

— A whammy or expression pedal

— A harmoniser or intricate pitch shifter

The Electro-Harmonix Micro POG is something of a modern classic. Condensing the behemoth ‘Polyphonic Octave Generator’ and its still-abrudly-large successor: its warm, organ like octaves have become a staple of the hard-rock genre. From Jack White, Josh Homme to — err— that bloke from Royal Blood –– it’s a mainstay amongst many pedalboards across the globe.

Its most famous application, no doubt, is to fatten leads. The lower octave holds down a bassline whilst fuzzier settings bring a synth-like quality to the mix. But it has softer moment all the same. Albeit a faux 12-string or chorus effect: the multitude of tones within the Micro POG are little short remarkable. It is, above else, a versatile tool. It can be a glitchy effect or a subtle parameter. It’s usefulness derives from context and user preference. It provides reliable tracking, though, and the compact package certainly sweetens the deal. Making it a box that stands tall after all of these years.

For the sake of this demo, I run through clean tones initially then add a Twin Twelve at 3:25. I go on to flip the pedal order at 6:45 to demonstrate the differences.

Primarily, the three knobs on the POG determine the Dry Mix and the sub or higher octave. All at noon [0:18] this can sound a little jarring —  but fairly self explanatory. With the Dry knob cranked, the full clean signal is heard, lending itself to a more natural ‘doubling effect’. This operates more as an inverted wet control: determining how much unaffected signal one wants to add. When wound back, it lets the octave effect take centre stage, proving more useful for those synthetic, abrasive parts. This is adjusted throughout the demo, but at [2:01] we see the dry mix rolled off. Notice there is a drastic change in volume and playing dynamic here. It’s inherently more ‘synthesised’ and demonstrates the extremity of tones on tap. In the clean settings, however, the separate octaves have more subtle applications. The lower sub fills out the bottom end with great clarity. It adds girth without being overtly colourful and retains the principle qualities of the original sound. And yes, the trialled and tested Seven Nation Army riff* works perfectly. [0:47– 1:12]

Moving up an octave, the Micro POG flirts with chimer sentiments. Think 12-string brightness with the option to compensate a lower octave. One poplar application of this is ‘organ swells’. The POG has a warmth and naturalness to it that can be felt by rolling volume in and out. Which negates the typical latency issues that digital effects have. [See: 2:30]. Using these two octaves in tandem is also fruitful. It becomes a darker, less ‘eighties’ inspired modulation effect. This is harder to convey on video, but it allows to filter out (or emphasise) specific overtones with separate controls. To some extent, it can be seen as an EQ of sorts. But an EQ that adds pitching and dimensions rather than frequencies. In a number of cases throughout the demo, [e.g 5:25], I adjust these dials to find a sweet-spot for the style at hand. It remains tactile even within the streamlined package.

All that said, the POG really becomes a more interesting animal when fed a dirtier signal. Although a point of contentious lies in placement — I personally prefer running the POG into distortion — others like to reverse this this. This is briefly conveyed at 6:45, where the effect become slightly more pronounced when placed after a dirt box, but sacrifices some organic qualities in the process. No doubt, a bit of tinkering is required regardless of placement. Digital artefacts can be unpleasant with heavy distortion which, thankfully, can be remedied by the mix control.

Indeed, the higher-octave effects, naturally, make for a great lead tone. [4:00] Think ‘Little Sister’ or ‘My Iron Lung’. These sharp, nasally tones really cut through the mix and — to my surprise — track without latency. It has a chewiness that really brings character. Equally, the lower octave works as shown in its clean moments; to bring a dimension and ‘thump’ that can easily go amiss. Whether this is for a lead riff or an ambient section is entirely subjective. I particularly like the way it adds velocity to groovier leads. [4:45-5:30] If anything, it’s the sheer scope of tones available that is most apparent. I like to to roll back the mix and use the octaves to add a gnarliness to a solo. Others may find it useful to fill out a three-piece’s guitar parts and liven up a section without the sterility of chorus. It even makes for a half-decent ‘wall-of-sound’, which I attempt to show at 6:15. Proving the Micro POG’s applications are, within reason, as far as the imagination.

In all honesty, the Micro POG is a rare breed. It may well be the only stompbox I’ve owned where I  genuinely find  no qualms. Any shortcomings are typically misplaced, as this unit does precisely what it says on the tin. If striving for ‘dive bombs’ and ‘Whammy’ effects, then a treadle-based system (Digitech, Boss PS-6 w/expression et al) would be more appropriate. Those looking for presets or more complex harmonising options may wish to look at its older siblings. But those looking for a warm, natural like octave pedal — in a package that is easy to use – then look no further. The Micro POG has a usability that makes in a worthy part of any tonal arsenal and for any genre. It has a tonality that I find rather inspiring to write with. It is worth noting, however, that Electro-Harmonix have since reissued this unit in a smaller package. I am not at liberty to compare the two — given it supposedly uses a different algorithm — but those desperate for real estate may wish to consider the smaller unit. Although given the scope the Micro POG covers —  from novelty noises to crafting a weighty live mix —  it warrants all the precious space it asks for. It’s truly a tool that allows one to rethink the limitations of guitar playing. And a indisputable classic for a reason.

—  It’s not necessarily ‘Micro’ in the post-Mooer world. Nor as complex as other shifters.