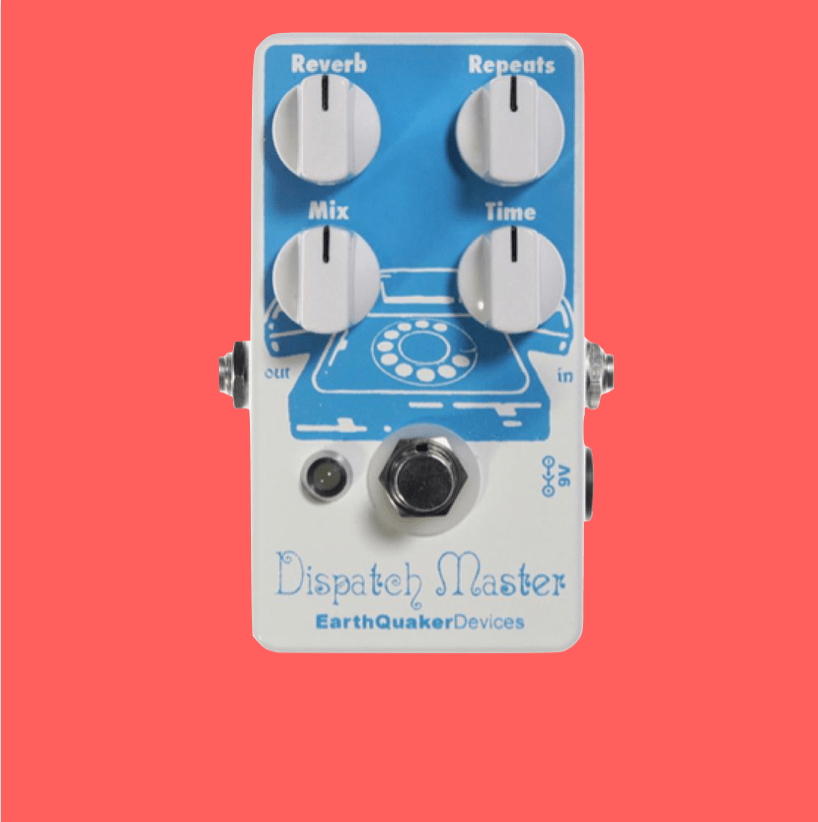 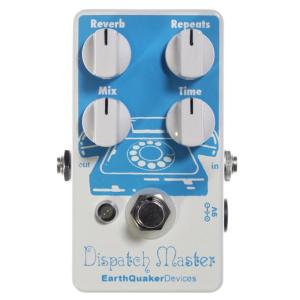 — A compact delay and reverb unit

— A unique blend of two effects Analogue style delay, Plate reverb) — specifically voiced for each other

— A power-hungry digital effect, with true bypass and a RRP of £160

— A particularly inspiring delay or reverb in its own right; nor suitable for every playing style

Ohio based Earthquaker Devices have blossomed in recent years. Loosely associated with Dan Aubarch’s touring manager in mid-noughties, the company have grown into one of the most ubiquitous boutique effects manufacturers. With a reputation for curve-ball ideas with solid build and sound stages, their capacity to inspire earns them an enviable status. A perfect example of both their approach and success lies in their ever-popular unit: the Dispatch Master.

Boasting both reverb and delay in a single box, the Dispatch Master follows in the vein of Shoegaze staple the BOSS RV-3, alongside an overlooked feature within the Strymon El Capitain. Engineered to work in tandem, however, the Dispatch Master offers a rich, musical blend of these effects. It ranges from natural decay to post-rock ambience in a package few others can match.

The delay itself is an analogue-voiced effect. It’s not as exciting as ‘vintage digital’ effects (DD-2, SDD-3000 et al) nor as rich as a Carbon Copy or DM-2, but it sits wonderfully with the reverb. It’s not as pronounced or attention-grabbing as aforementioned variants but that is precisely by design. It’s a more subtle effect than anything U2-inspired. In the accompanying demo, the ‘all-at-noon’ repeats are evidently rather quiet. [0:30] It also shows the repeats in isolation [1:05] which articulates its more vintage sensibilities.

On the Reverb side of things, we find a higher fidelity approach. Opting for a one-knob Plate reverb; the Dispatch Master brings an eighties cleanliness to the mix. This has a bright modulated quality that can attain some luscious overtones: especially with a Bigsby. [2:20]  This can be rolled off completely, as can the repeats, but the pedal really shines with both effects in unison. In fact, it is precisely the coupling of effects that make the Dispatch Master worth owning.

Curiously, every demonstration of this pedal favours a clean tone. It’s no surprise why — this is where the pedal works best — but I shall discuss both dirty and cleanlier moments. For the sake of the demo, I switch on a JHS Twin Twelve at around the 6 minute mark, which allows for some separation.

Primarily, though, its clean applications remain the strongest. In isolation, the delay can conjure some authentic –– and dramatic –- slapback effects, something that seems frequently overlooked in other reviews. [1:27] The plate reverb gravitates towards clean tones all the same; where notes fade into something much crisper and ‘hi-fi’. It seems all together seems more natural, although there is a modulated effect at higher settings. This can be felt with the repeats, too, but note that this is not a ‘Shimmer’ effect or anything particularly pitched. In fact, when used with the delay, it is harder differentiate where the repeats ends and reverb begins. At its lower settings [4:30] this blend becomes more musical; a moderate setting can add extra breathing space to a dry signal. At 4:50, it more specifically adds ambience to rhythm playing. Which proves the Dispatch Master can satisfy the all encompassing middle-ground between slapback and post-rock.

Crunchier settings, however, do not fare as consistently. An overdriven signal can clash with these brighter reflections, so a fair bit of tweaking may be required. The Twin Twelve is a darker voiced overdrive and it plays fairly well with the Dispatch Master. But the lack of parameters per effect (i.e between the Reverb and Delay) may become an issue. At around 6:40 it offers a practical, if not less pertinent, dimension to the distorted signal. It also works well with fuzzier boxes, to carve large, cavernous echoes. With the reverb dimed back it even enters Gilmour-ish territory*  [7:15] – creating a more familiar and classic tone.

*Disclaimer: Unlike my playing ability.

To some extent, this is the best application for those looking to run the Dispatch Master with distortion. It is capable of some dramatic soundscapes at higher settings, but it is far less predictable in doing so. At 8:10 the louder effect is obviously a little intrusive. It can be a battle to make it sit well in the mix. In fact, as one who uses an ‘aways-on’ booster before delay –– like the fabled EP-3 –– I found it rather temperamental with what is placed before it. I actually experienced some clipping noise, which is why Earthquaker Devices suggest placing boosters after the delay. Although the pickups used throughout this demonstration are particularly hot, it resulted in fleeting clipping noise at normal volumes. It’s also an immensely noisy effect on a daisy-chained power supply –– not a problem for all –– but certainly worth noting.

With that said, the Dispatch Master remains a remarkably dynamic effect. Between 8:30-9:15ish I try to model its responsiveness to playing style. Softer lead playing comes across clearer, with heavier, lower-string action causing bloom and muddiness. The extremities can be tamed with varying attack, which can prove especially tasteful if building an interlude or a transitional part. But this really is the double-edged sword of the Dispatch Master. In that it offers a wonderful, responsive blend of two effects but the applications of such are not always the same. It requires constant tweaking and reconfiguring that at times undermines the convenience of its footprint.

Indeed, the shortcomings for the Dispatch Master really come down to expectation. Don’t anticipate a great deal of tone shaping or programability from this box. This isn’t a be-all-end-all reverb or delay solution, and the effects are rather accompaniments –– offering 50% of the equation –– than substitutes for separate units themselves. The one-knob reverb won’t knock your Bigsky off anytime soon, nor will the delay, whilst gorgeous, relegate your programmable super-computer obsolete.

Overall, the Dispatch Master excels in that unique blend of the effects. Where the dark repeats hit that bright plate reverb. For a small board, it is the perfect one-box ambience for giving a clean or backline amp some much needed life. But for those hoping to replace a delay and reverb pedal, think carefully about its application. I personally find myself itching ever more for separate units, just to tweak certain parameters and expand my tonal palate. But all the same, the Dispatch Master does something magical and unique. It is something I find inviting every time I plug it in and something I find very inspiring to write with. For this reason, I recommend the Dispatch Master provided it sits amongst your set-up appropriately. There is some irony in an pedal boasting two effects that ultimately becomes a one-trick pony. But that is precisely what the Dispatch Master is. It’s not a delay and reverb killer but rather the perfect copulation of the two. And it does a fine job at just that.

— In adding natural ambience and slapback to a clean signal

—  Some clipping issues make it less appropriate for high-gain settings

– Requires a lot of power: expect noise on non-isolated supplies